To support his claim of being the Promised Messiah, Mirza Ghulam Qadiani often engaged in debates with little known Christians. In 1893, Mirza Ghulam challenged Mr. Abdullah Khan Atham, a retired deputy commissioner and a Christian, to a debate to prove the truthfulness of either religion (Chirstianity/Qadianiat). The debate between Mirza Ghulam and﻿ Mr. Atham commenced on May 22, 1893 and went on till June 5, 1893.

Towards the end of the debate, Christians brought one blind, one deaf, and one paralyzed person and challenged Mirza to cure them as Jesus(pbuh) had done! Naturally, Mirza was not able to cure any of them. Mirza Qadiani offered such a weak argument against Mr. Atham and was so badly humiliated Several Qadianis even converted to Christianity. In return, Mirza resorted to making blasphemous statements about Jesus(pbuh), one of the greatest Prophets of Allah﻿

Since Mirza was neither willing to correct his own moral and ethical flaws nor able to perform miracles, he could not have ever hoped to raise his own status to that of Jesus(pbuh) - whom he viewed as his competitor to messiahship. Instead, Mirza resorted to making desperate and slanderous remarks in an attempt to try to lower the status of Jesus(pbuh) to his own FILTHY level!

Now Qadiani Ahmadiyya Cult leadership claim that Mirza Qadiani was ONLY INSULTING the JESUS pbuh of the Christians by QUOTING from the bible, yet when a QUOTE is REQUESTED from a them it never seems to be WORD FOR WORD (ultimately that's what a quote is) but stil Qadianis defend Mirza Qadiani who at﻿ first claimed he was 'The Guided One' (Al-Mahdi) then the 'Promised Messiah' (Hazrat Isa AS) but can a man who is GUIDED by ALLAH turn against the Quran?

DEFINATELY NOT!!! Allah SWT is clear﻿ about insulting those who people take for their Gods: [6.108]"And do not insult those they invoke other than Allah , lest they insult Allah in enmity without knowledge." So Allah SWT is VERY CLEAR about this! 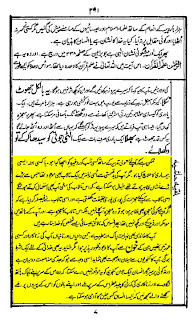 "Very likely he (Jesus, The Messiah) may have healed some blind person or cured some other ailment by ordinary means. Due to luck, there was a pond which was the source of great miracles, during his time. It can be assumed that he also used the clay of the same (magic) pond. The complete reality of his miracles is unfolded by this pond. A categorical inference drawn from the presence of this pond is that, if he performed any miracles at all, they were not his miracles, rather those attributable to this pond. He (Jesus) had nothing to his credit except cunning and deceit.""Jesus's three paternal and maternal grandmothers were fornicators and prostitutes, from whose blood Jesus came into existence. This is why Jesus had an inclination for prostitutes perhaps due to his ancestral relationship with them, otherwise no pious man could allow a young prostitute to touch his head with her filthy hands, and massage his head with the unclean perfume purchased with the earnings of adultery, and rub his feet with her hair. Let the intelligent judge what sort of character such a person must possess " 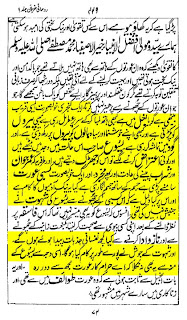 "A beautiful prostitute is sitting so close to him (Jesus PBUH), almost embracing him. Sometimes she massages his head with perfume or holds his feet, at other times she lays her beautiful black hair on his feet and plays in his lap. In that condition, Mr. Messiah is sitting in ecstasy. If someone rises to object, he is scolded. In addition to his youth, dependency on alcoholic beverages, and being a bachelor, a beautiful prostitute is lying in front of him touching her body against his. Is this the behavior of a virtuous person? And what evidence or proof is there that Jesus did not get sexually provoked by the prostitute? ... The sexual excitement and arousal had done its work to the fullest. This is the reason why Jesus could not even open his mouth to say 'Oh adulteress! Keep away from me'." 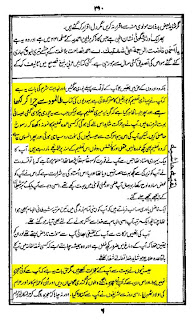 "A most shameful thing is that the sermon on the mount, which is the essence of the Bible, Jesus plagiarized from Talmud and pretended it to be his own preaching. Since this fraud has been exposed, Christians are very embarrassed. Jesus did this to perhaps gain influence by presenting some good teachings... The unfortunate thing is that these teachings are an afford to the rules of Wisdom and upright conscience." 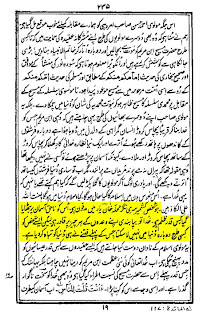 "It is unjustly said about the person (Jesus) who is buried in the locality of Khanyar, Sirinagar, Kashmir, that he is sitting in the Heavens. How great an injustice is this! God, in keeping to his promise has power over everything. But, he can never send a person to this world the second time, whose first coming caused so much harm." 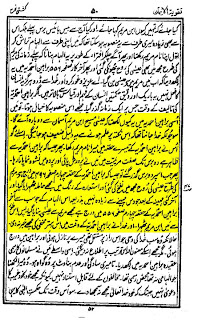 "God named me Mary in the third volume of Baraheen-e-Ahmadia (the book of "revelations" written by Mirza). I was nurtured for two years as Mary and was raised in a womanly seclusion. Then, the spirit of Jesus was breath into me just as was done with Mary. Hence, I was considered to be pregnant in a metaphorical manner. After a period of several months, not exceeding ten, I was made Jesus out of Mary by the revelation embodied in the last part of the fourth volume of Baraheen-e-Ahmadia; and thus, I became Jesus, son of Mary. But, God did not inform me of this secret at that time."

"What was the character of Messiah, according to you?  An alcoholic and gluttonous person, neither abstinent nor a pious worshipper, nor an adorer of truth.  He was an arrogant and self-conceited claimant of divinity." 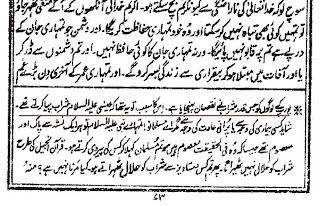 "The root cause of all the damage that alcohol consumption has had on the Europeans was that Jesus used to drink alcohol, perhaps because of some disease or an old habit."